I looked this up on the web. In fact, the Black and Decker company didn’t start marketing coffee makers until the 1980s, I think. It was called the Spacemaker Coffee Maker because it would fit under kitchen cabinets.

Sena tells me we had a Black and Decker coffee maker a long time ago, but I don’t remember it. Then we went with Hamilton Beach, then Mr. Coffee. We also had a Keurig, but the coffee pods were really expensive. This Black and Decker replaced an old Mr. Coffee. The clock didn’t work on it, a problem that I think got started after the derecho a couple of years ago.

Anyway, the Black and Decker is a 12-cup thermal programmable. The number of cups we get out of it is 8, and I think that happens with every coffee maker we ever had which bills itself as a 12-cup. I wonder how big they think most coffee cups are?

It has a smart-looking stainless steel thermal carafe and something with an interesting name, “VortexTM Showerhead.” It sounds like something out of a science fiction movie, but it’s a gadget that looks like a red showerhead that’s designed to provide even saturation of the coffee grounds for “optimal water flow for maximum flavor.”

It has a digital LCD clock, like most coffee makers have, but it’s not backlit. You can see the clock but you have to squint at it. You almost have to use a magnifying glass to see the word “STRONG” which appears when you press the button for strong coffee, which we like.

The user manual suggests (in bold face type) to fill the carafe with hot tap water and empty it before brewing. This is an extra step which is supposed to warm up the carafe and help keep coffee hot. It takes extra time and we don’t think it makes a bit of difference.

We’ve been drinking coffee a long time. It’s actually good for you. Some claim it can even reduce the risk of depression, but I would take this with a grain of salt. If you took that sentence literally, then coffee might not do much of anything for you. You can get too much caffeine, but other than that, it’s good for your health.

I guess you can use it to dye your gray hair, which is funny. You just brew some coffee, rub it into your hair, and right away your hair is much more alert. 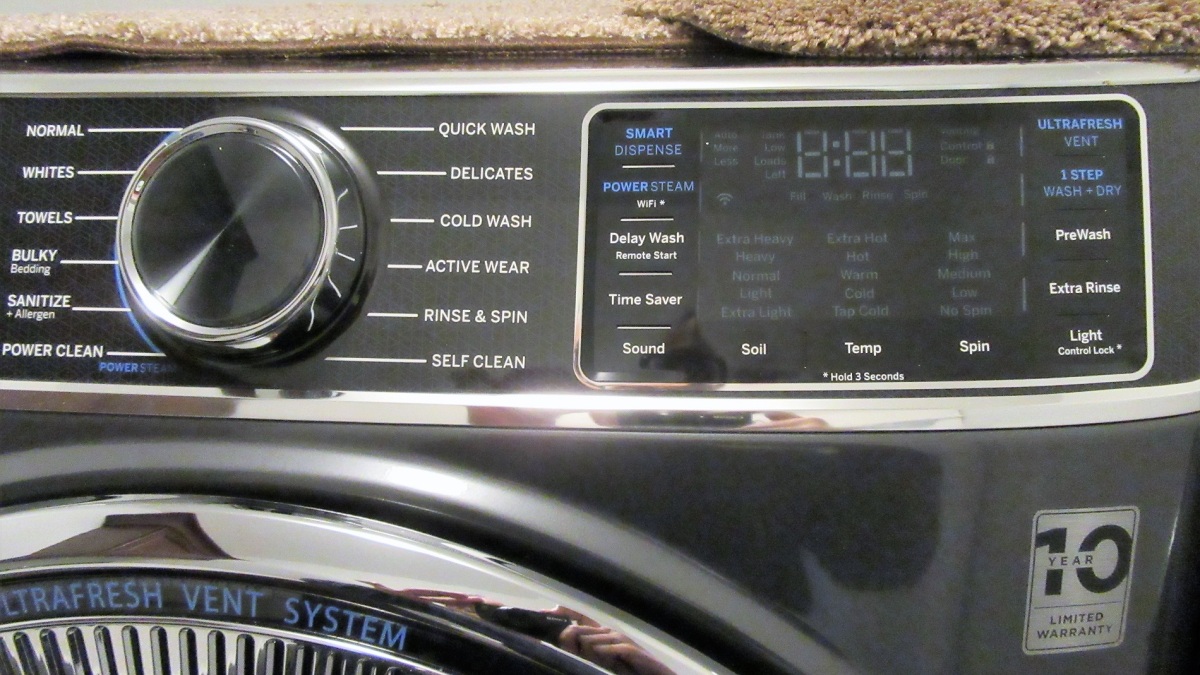 I’m not a laundry guy, but we just got a new GE washer and dryer pair to replace the old set. I’m just going to make a few comments about the washer, model GFW850SPNDG. This is not an exhaustive review and I don’t have any conflict of interests with GE.

First let me get something off my chest about the much-vaunted ULTRAFRESH VENT System with ODORBLOCK, trademarked by Microban International, Ltd. Most of the YouTube videos I’ve seen about this feature promise you can say goodbye to leaving the washer door open to avoid the basket getting stinky from things like mold and old tootsie rolls. That might be true if you’re willing to leave the system running for up to 8 hours as it intermittently spins. Look, you can give the gasket and other areas of the washer a quick wipe-down and just leave the door open, OK?

The nice thing about the SmartDispenser is that once it’s filled, you can forget about adding detergent at all for every load. You still need to fill the fabric softener and bleach compartments as needed. When the detergent is about to run out in the SmartDispenser you’ll see a red-colored light message on the Smart Dispense digital display on the control panel saying “Tank Low” and another message below that which is labeled “Loads Left” in the SmartDispenser tank. The “Tank Low” message comes on when there are about 8-10 loads of detergent remaining (according to instructions).

The SmartDispenser adjusts the amount of soap to squirt out according to the size and composition of the load. According to instructions, a normal load weighs 8 pounds and when the SMART DISPENSE pad is set to “Auto,” it will magically determine how much to add or subtract from the standard 1.5-ounce dollop of soap. Otherwise, you can press “More” or “Less” to add or subtract 40%. If your load of clothes weighs more than 8 pounds, you should calmly put it on a diet and hire a personal trainer for it. Never fat shame your laundry.

While we’re at it, let’s look at the dispenser drawer in a little more detail. The front compartment is for liquid or powder detergent. You put either kind on the right-hand side of the goofy-looking blue flap. What matters is whether that blue flap is up or down. Flip the flap down—use liquid. Flip the flap up, use powder. The way to remember this is that when the flap covers the left-hand side, that means the flap is up. If you repeatedly flip the flap back and forth, you can put yourself into a deeply meditative state and cause world peace—which nobody seems to want.

The next two compartments to the rear of the detergent compartment are the bleach and fabric softener compartments. It’s normal for them to be swamped with water between wash cycles, according to the instructions. I don’t think you’re obligated to take the whole drawer out and turn it upside down to empty them, especially if you don’t have a sink in the laundry room. I suspect the compartments get flushed during washes. Or maybe a tiny alien flies in and sucks the liquid up to use as spaceship fuel.

The next compartment back is the SmartDispenser. It proudly advertises the Tide label. In order to get the lid open to load soap, you have to press the small blue tab in back of it so you can pull the drawer out a bit further. You can also remove the whole drawer by continuing to pull on it. Just be careful to press the tab in again as you push the drawer slowly back in place. If you slam it shut, you’ll upset the balance of the cosmos and a supernova will destroy the galaxy.

Remember, there are several GE washer models out there. Some features will not be available and some instructions will not apply—and they might mystify you. The section in our instruction book which tells you that, in order to manually select the amount of soap for a load, you should press the SMART DISPENSE pad on the control panel to select detergent for a Small or Large load. Don’t believe it; this is probably left over from a now defunct model.

OK, that’s all I got for now. I heard it through the grapevine that the next model will be a wringer washer.