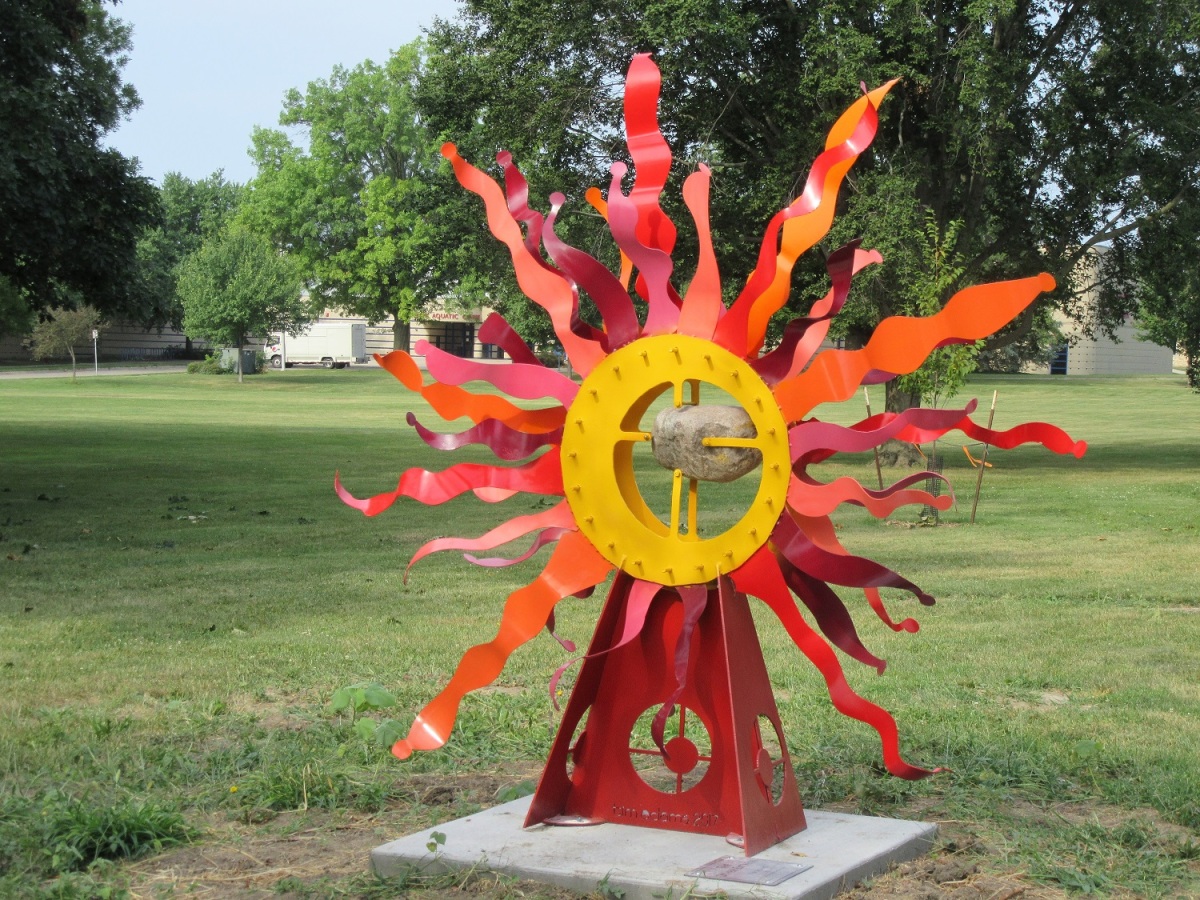 Since the weather took a break yesterday from the triple digit temperatures, we took a little getaway to a few of the city parks to see the new public art. This is connected with the Iowa City Public Art Program. Five sculptures were installed about a week ago at Terry Trueblood Recreation Area, Riverfront Crossings Park, and Mercer Park.

Three sculptures are at Riverfront Crossings. Two are by V. Skip Willits: Palimpsest and Cloud Form. The third is by Hilde DeBruyn: Sea of Change. Sena knows that Sea of Change looks like a sailboat when you look at it from the right angle. We could see clouds through Cloud Form.

I noticed that V. Skip Willits’s name could be spelled wrong (Willets vs Willits?) on the artist’s nameplate below the sculpture, Palimpsest (also on Cloud Form). I also discovered a 2013 news story of a similar sculpture at the Ames Annual Outdoor Sculpture Exhibition although it was given a different title: Prayer Torso. His sculpture Swans on the Marsh featured in a 2015 image on Sculpture Walk Peoria in Illinois and another fashioned out of corrugated iron in Effingham, Illinois resemble Palimpsest as well. A news story in the March 26, 2021 Effingham Daily News quotes Willits as identifying the sculpture’s title as Cipher. He and probably a few passersby had written on the piece. There are also variant spellings of his name, including V.skip Willits, lower case “s” for “skip.” He’s not the same person as Skip Willits, who is a photographer selling wall art. In any case, Palimpsest is a pretty good example of a palimpsest.

According to the dictionary, a palimpsest is a “piece of writing on which the original writing has been effaced to make room for later writing but of which traces remain.” More generally, it’s something that’s been reused or altered but still has traces of its earlier form. You might want to snap a picture of the sculpture and rotate it in order to see all that’s written there; for example:

“Let me sing to you now, about how people turn into other things.”

I think it could be evocative of what many have noticed and remarked on, only using different words in different languages in different circumstances over millennia. We’re all turning into other things in the turbulent sea of change, sort of like clouds which are the ultimate shape-shifters.

This was the first time we had ever visited Riverfront Crossings Park and we found something familiar there—a stone inscribed with the words Calder’s Path: An Inspiration to Us All. Pebbles were strewn all over the path. After all, no path is without stones. We frequently drive by a small and neatly kept neighborhood park called Calder Park many blocks away. It’s a memorial to a boy named Calder Wills, who passed away of leukemia several years ago. We never knew him or his family. Based on what I’ve gleaned on the web, Calder had big dreams. He was strong. He was a person who turned into a light.

We also enjoyed Mercer Park where we saw the sculpture The Other Extreme, by Tim Adams. Mercer Park and Aquatic Center is named in honor of Leroy S. Mercer who distinguished himself as Iowa City Mayor, state representative and state senator as well as a successful businessman and banker. The sculpture is the sun with a rock at the center. According to Adams, it’s utterly simple; a clear vision of how everything started. There was only the earth and the sun. That was it. And then change took over. Things changing into other things. People turning into other things. Tim Adams art has been influenced by his career as a Registered Landscape Architect. His subjects are influenced by the rugged Iowa weather, which his creations are designed to withstand with little need for maintenance.

Sena and I both got a kick of the automobile jungle gym.

We had already visited the 5th sculpture last week. It is called Bloom by Hilde DeBruyn. Again, the theme of change because it’s a flower and flowers start from seeds in the earth, and burst up to the sun. Because this is where it all begins. DeBruyn is another gifted Iowa artist who has said in an interview with Iowa Artisans Gallery that her work often involves the “natural cycle of growth and decay.”

We begin with one extreme, the raw and wild. Eventually, we reach the other extreme, the ultra-refined and wildly complex. In the middle, we erase and then reconstruct many things from the relics of ancient wisdom or folly, forgetful of bygone grandeur or catastrophe, rarely startled by déjà vu.