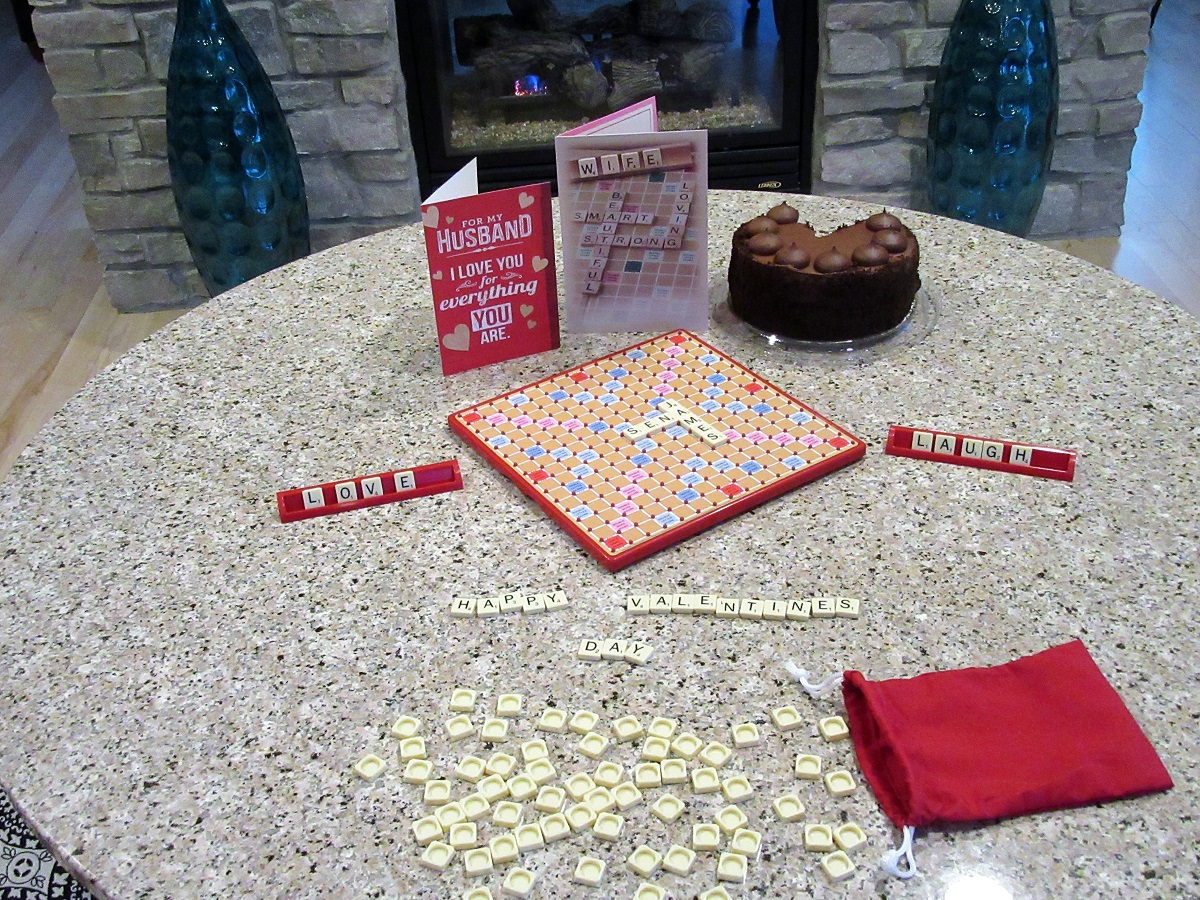 Happy Valentine’s Day! Boy, are you guys lucky! I woke up yesterday morning with the crazy idea of making a video of me singing “L-O-V-E.” You know, the one Nat King Cole made famous. What do you mean, “No, what are you talking about?”

No kidding, though; I even cleared my throat a couple of times just thinking about it, getting ready to burst into my full-throated, only slightly phlegmy 60ish voice. I let that go after my first cup of coffee, thank goodness. You don’t know how close you came. My singing would kill a cat from a hundred yards.

Anyway, Sena got a kick out of my Valentine’s Day card because it had a scrabble theme. The top line actually is made of 3-dimensional Scrabble tiles. I bought that card before I found the Tile Lock Scrabble game.

By the way, I’m zero for 3 games so far. We really need a Scrabble dictionary. Sena plays the video scrabble game a lot and she played the word “Qi” twice (at right angles to each other) in our second game, claiming it’s a real word. I didn’t argue and without a dictionary, I couldn’t challenge it. But she didn’t know what it meant. “I’ve been meaning to look that up,” she says.

It turns out Qi is a variant spelling of CHI (pronounced like the first syllable of cheapo, a variant of cheapskate, as in a guy who spends the least amount of money possible on a Valentine’s Day gift for his wife). Qi is defined as the energy or life force in everything and it’s the basis of most of Chinese medicine and philosophy. It’s also the single most commonly used word in Scrabble tournaments.

We made this deal a while ago. If we buy a cribbage board in the shape of the state of Iowa with a road map and names of major cities, etc. on it, then I would agree to play Scrabble. We got the Scrabble game first. A deal’s a deal, even if it’s backwards. Sena ordered the Iowa State Map cribbage board yesterday. She wins most of the cribbage games, too. Here’s how she counts her scores: “15 for 2, a run of 3 for 19 (laugh it up you people, these are the jokes; hint, you have to know what scores are impossible in cribbage), and a flush for a total of 29; hey, I win again!”

You guys need to thank for me another thing. At first, Sena allowed me to use just one snapshot of us in this post. It’s of us at Niagara Falls in front of the helicopter we took a ride on to get a fantastic view of the falls. But we got to looking at a ton of pictures. We laughed a lot. We chose more pictures.

Have a great Valentine’s Day!